What is Adrenal Fatigue?

Adrenal fatigue is a common hormonal problem that our Naturopathic Doctors treat at the clinic. Adrenal fatigue feels just like it sounds – it is often associated with exhaustion or burnout and it affects many people at some point in their lives.

But what exactly IS adrenal fatigue and how does it happen? First, it’s important to understand the two tiny glands that sit on top of the kidneys – the adrenal glands. body respond to stress by releasing specific hormones – the most well known of these is cortisol, also known as “the stress hormone”. The adrenal glands also secrete hormones such as DHEA-S, aldosterone and cortisol.

The term adrenal fatigue has come to mean an imbalance in levels or patterns of secretion of the stress hormone, cortisol. Patients with this condition do often experience fatigue, and may be suffering with symptoms of burnout or exhaustion. In a busy city like Toronto, our naturopathic doctors see plenty of cases of adrenal fatigue in our clinic! So let’s take a look at what adrenal fatigue really is, and what can be done about it with naturopathic medicine.

There is one exception, Addison’s disease, an autoimmune condition where the adrenal glands become destroyed by the immune system and make insufficient cortisol. Addison’s is very rare and life-threatening – the vast majority of patients with adrenal fatigue do not have Addison’s Disease.

Adrenal fatigue is a condition of dysregulation, rather than glandular damage or exhaustion. To understand how this works, we need to take a look at how the adrenal glands work.

The adrenals are in direct communication with a part of the brain known as the hypothalamus and its neighbour, the pituitary gland. The pituitary gland is commonly known as the
“master gland” and specializes in managing the levels of many different hormones, including cortisol.

The axis of communication between the hypothalamus, pituitary and adrenals is known as the HPA Axis. Ultimately, adrenal fatigue is a pattern of symptoms that reflects a dysregulated HPA axis.

The HPA axis should behave in a specific way in order to keep the body healthy. A healthy brain-adrenal axis works hand-in-hand with the circadian rhythm (day/night), and in alignment with stress responses throughout the day.

While sleeping, the pituitary gland signals the adrenals to keep cortisol levels low, by reducing the secretion of ACTH and cortisol. Around 4am, in preparation for waking up in the morning, the pituitary gland signals the adrenal glands to make a large burst of cortisol turning “on” many different processes in the body for the day. From that point, the adrenal glands make less cortisol, hitting their low point before sleep. 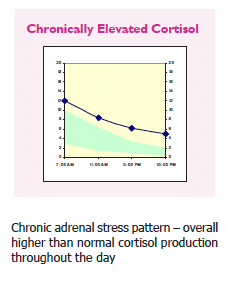 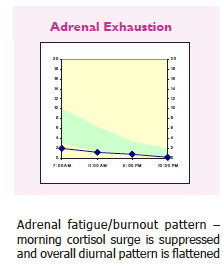 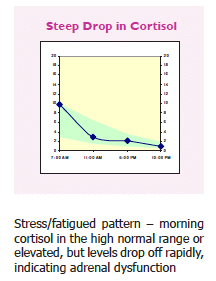 Adrenal fatigue can start from many stress-related conditions. When stressors are present throughout the day, levels of cortisol may rise in response to stress. In some cases of chronic stress, burnout, exhaustion or trauma, patients may be over secreting cortisol through the entire day.

Over a longer period of time, this can “confuse” the HPA axis, as it works on negative feedback. Ultimately, the adrenals no longer release the large burst of cortisol in the morning, since the natural feedback loops have been broken. Without this “energy burst” to help turn on processes in the body, patients can feel many symptoms, which all fall under the “adrenal fatigue” category.

When this occurs, other adrenal hormones can be impacted too, including DHEA-S, and aldosterone. Adrenal fatigue can create dysfunction in overall physiology since cortisol regulates many different processes. In adrenal fatigue, a major aspect of the body’s ability to self-regulate is lost.

Symptoms of Adrenal Fatigue Include

How Can Naturopathic Treatments Help?

Naturopathic Doctors provide treatments that support the natural circadian rhythm of cortisol and help to manage any underlying stressors that are affecting the adrenal glands. In each patient these underlying causes may be different. For example, if a patient regularly experiences hypoglycemia, this will trigger the release of cortisol from the adrenal glands and over a prolonged period of time contributes to adrenal fatigue. Naturopathic treatments for this patient would then include nutrition and lifestyle management to balance blood sugar levels.

In another patient, insomnia may be a root cause of their adrenal fatigue and the naturopathic doctor would then offer natural treatments that support deep, restorative sleep.

Adaptogens (herbs, and supplements that support stress, cortisol/adrenal responses and resilience) are often included in the program. Since adrenal adaptogens have a wide variety of different properties these are individually chosen to match the patient’s needs. For example, some adaptogens improve energy levels, whereas others are more calming in periods of intense stress. Some adaptogens lower high levels of cortisol, and others are supportive for patients with low levels of cortisol. Combinations of adaptogens can also be included and timed precisely in the day to match a patient’s symptom picture and pattern of cortisol more exactly.

How We Test for Adrenal Fatigue

Adrenal Fatigue can be tested through a variety of different methods. Cortisol levels can be assessed through blood, saliva and urine. Each has different benefits and can provide slightly different information.
Blood testing for cortisol is simple to complete and affordable. When blood tests for cortisol are ordered they are typically completed in the morning, providing a view of the morning “high point” of adrenal response. The downsides of blood testing for cortisol is that the patient must drive to the lab and during that time, other stressors may interfere and alter results. Blood cortisol tests show levels of “total” cortisol, (a combination of free cortisol and cortisol that is bound to proteins in the blood).
Free cortisol comprises around 1% of cortisol in the blood and is “active” in tissues whereas bound cortisol is not. This is why blood testing for cortisol may not always provide an accurate assessment of cortisol and its effect on tissues.
Urinary testing for cortisol is highly accurate and can be timed at 4 different times in the day (4 point or diurnal cortisol testing). Diurnal cortisol tests show clearly the pattern of cortisol release and any problems with the pattern are easily seen. This also allows patients to learn if there are stressors at certain times of the day – for example low blood sugar in the afternoon – that may be contributing to cortisol responses.
This type of testing is provided by our clinic through the DUTCH test. Urinary testing for cortisol includes cortisol metabolites, free cortisol, total cortisol, and inactive cortisone. This provides a great deal of detail for patients with more signficant adrenal fatigue and is more expensive than the other testing options. It can even detect the influence of the thyroid on adrenal function.

Saliva cortisol hormone testing is a highly accurate way of measuring free cortisol. Since saliva can be easily collected at home, it is tested 4 different times in the day. Since saliva can be easily collected directly upon rising in the morning, no interfering factors will affect the result. Unlike many other hormones that are not accurately tested in saliva, free cortisol in saliva is a highly accurate measure of adrenal response.
Saliva testing provides the pattern of cortisol response for patients with adrenal fatigue, and allows patients to see time-related factors that may be influencing their cortisol levels. Given the amount of detail provided by this test, it is relatively affordable, simple to complete and is a highly popular choice when looking to diagnose and treat adrenal fatigue with naturopathic medicine .