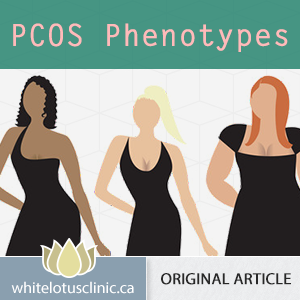 PCOS is an age-old disease,

but recent research is expanding our understanding of the potential long-term health complications of this syndrome. While women with PCOS usually seek medical care due to a number of more immediate unwanted symptoms – namely irregular or absent menstrual cycles, increased facial hair growth, weight gain or acne; it is now well established that these same women are also at an increased risk for several major chronic diseases. PCOS has repeatedly been associated with markers of elevated cardiovascular risk; namely endothelial cell dysfunction (a very early marker of cardiovascular disease), insulin resistance, dyslipidemia and obesity (1). A clear understanding of these increased risks is crucial in developing optimal treatment protocols for these women.

According to the Rotterdam consensus criteria, four subtypes of PCOS have been defined (2):

In “Classical PCOS”, women exhibit the complete triad of symptoms characteristic of PCOS: increased androgens, oligomenorrhea and cysts on their ovaries.

Women with each of the other PCOS subtypes will exhibit a combination of any two of these three criteria, namely:

PCOS Phenotypes and Disease Risk: What you Need to Know

Stemming from the above criteria, two researchers set out to define the cardiovascular risks associated with each subgroup of women (1). What they found was that women with “Classical PCOS” are at the highest risk of cardiovascular complications. In fact, metabolic syndrome has been reported to be three times more common in classic PCOS as compared to other subtypes (3). These women generally have a higher BMI, are more severely insulin resistant and exhibit a greater degree of dyslipidemia (1). In particular, small dense LDL and lipoprotein (a), two indicators of increased atherogenicity, were shown to be higher in the subset of women with PCOS who are not ovulating regularly as compared to those who were (1).

The 4th subtype of women with PCOS, those who are ovulating and menstruating regularly, tend to have a lower BMI and a lesser degree of hyperandrogenism. While they are still at an increased risk for cardiovascular disease risk as compared to women without PCOS, they tend to exhibit a more mild degree of metabolic complications as compared to their other PCOS counterparts (1).

Women with the 3rd subtype of PCOS, on the other hand, who lack the elevated blood androgen levels, exhibit the lowest cardiovascular risk, and often even show no increased metabolic risk as compared to other age-matched women (1). In fact, population studies have allowed us to understand that having elevated androgen levels imparts a greater risk for cardiovascular complications, and this risk persists for women with PCOS even beyond menopause (1).

In an attempt to define a unique set of cardiovascular risks factors for each PCOS subtype, it becomes evident that each of these subclasses may not be as distinct as has been proposed. In fact, these classes may actually be part of a continuum, whose clinical manifestations become evident in relation to increases in body weight. Weight gain, in particular abdominal adiposity, worsens insulin resistance, which may, in turn, aggravate the clinical picture of PCOS. Indeed there is good evidence that abdominal weight may exacerbate any PCOS subtype and place a woman at an earlier risk of atherosclerosis and cardiovascular disease risk. Subdividing women with PCOS according to their phenotype, however, does allow us a greater understanding of their current risk for further complications and hence can direct the necessity for aggressive intervention and dictate the most effective treatment protocols targeting individual disease risk profiles.