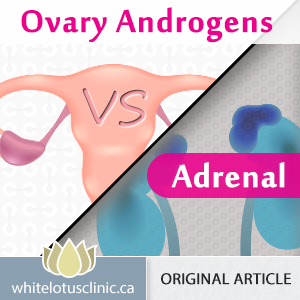 PCOS (Polycystic Ovarian Syndrome) is a condition affecting approximately 10% of the female population. It is the number one most common reproductive health concern in women and affects not only fertility, but also emotional and physical well-being due to its far-reaching health implications. High DHEA-S and testosterone in PCOS are common, however what is the difference if any between these two androgenic hormones? Why do some women with PCOS have specific androgens that are high, or high in the normal range and most importantly, what does this mean?

The Rotterdam criteria for the diagnosis of PCOS are:

There are both omnivorous and vegetarian plans available.

In my upcoming book on PCOS, I will go through the different phenotypes of PCOS and how to treat them effectively. It’s important to note that the understanding of PCOS is not yet complete. That being said, we do have a good amount of information on what makes up the unique variants of this common hormonal disorder.

In women with PCOS, androgens like testosterone are a very problematic part of the disorder. Most women suffer greatly with hirsutism, acne, and hair loss. Excessive androgens are also responsible for inhibiting ovulation and reducing healthy follicle development. High androgens are also associated with an increased risk of cardiovascular disease in PCOS. It has been found that women with elevated androgens have a similar cardiovascular risk profile as men. Cardiovascular disease is something which starts many years ahead, and as such it’s important to head it off before it causes major health problems. As such, it is crucial to determine both the level of and how to reduce the excessive amount of androgens in women with PCOS.

Sources of Androgens in PCOS

In PCOS, it has been found that there are actually two different sources of androgens, the ovary and the adrenal.

Unfortunately, in 40-50% of women with PCOS, there is also another source of androgens, which is the adrenal glands. The adrenal glands produce all of the DHEA in the body. It’s important to note that about half of another androgenic hormone, androstenedione, is produced by each of the adrenals and ovaries.

Types of Variation in PCOS?

It has been found that women with PCOS might actually have different variants on the “types” of androgens that predominate in their conditions.

Some women are more “adrenal dominant” and others are more “ovary dominant” with respect to androgen production. It appears that there is a clear difference between the two with respect to risk for both inflammation and cardiovascular/metabolic disease risk.

A 2012 study comparing a group of 280 women with PCOS, looking at their adrenal and ovarian androgens. The ratio between DHEA-S (adrenal androgen) and total testosterone (ovarian androgen) were calculated for the group of women. The median value for the study group was 4.40. They then compared body mass index, waist circumference, hirsutism (according to the Ferriman-Gallwey score), inflammatory markers, and menstrual cycle length in the two groups.

Across the board, the group with the higher ratio of adrenal androgens had better outcomes with respect to body mass index and waist circumference, hirsutism and also had a shorter cycle length. The group with higher DHEA also had better lipid (cholesterol) profiles and lower levels of inflammatory markers. Although this study is quite small in size, it is interesting to note that the adrenal “typeology/phenotype” of androgen production appears to be protective in PCOS.

A similar result was found in another study, completed in 2007 on a group of 238 young women with high androgens. In this particular study, the women with the highest levels of DHEA, the adrenal androgens, were found to have the lowest levels of different inflammatory markers. Interestingly, although women with high DHEA-S had higher testosterone levels overall, they also had lower insulin, lower LDL cholesterol and higher HDL cholesterol.

As such it appears that the source of the androgens may make an impact on the metabolic and reproductive outcome of a woman with PCOS. As such it may be useful to test the levels of testosterone (ovarian) and DHEA-S (adrenal) androgens, to be able to predict the phenotype or severity of the syndrome, and as such make adjustments to treatment accordingly.