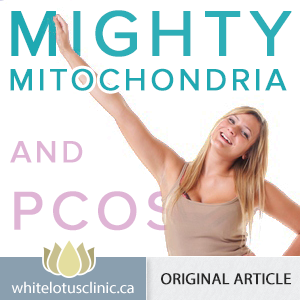 Our ovaries are what is known as “dynamic” organs, meaning that the cells within are involved in a constant process of development and change. A process known as folliculogenesis happens in the ovary, as the eggs develop from a tiny primordial state, to a larger form that is ready for ovulation.

The folliculogenesis process can last more than a year and is highly dependent on the energy production provided by the mitochondria. In addition to all of this, the mitochondria are the rate-limiting step for the production of hormones in the ovary. Without the mitochondria, we can’t have healthy follicles and healthy eggs.

When it comes to fertility, our mitochondria are one of the most important factors to consider.

In PCOS, the high levels of insulin and testosterone that are present in the ovary can create inflammation and hormonal dysregulation that disrupt the function and development of the ovary.

Coenzyme Q10 is what is known as a mitochondrial antioxidant. It’s a substance that rests at the borders of the mitochondria, protecting them from damage that can be produced by either free radicals, or by the rampages of insulin resistance.

Coenzyme Q10 also helps in the production of energy in the mitochondria, through what is known as the electron transport chain. This “boosts” the mitochondria ability to fuel the follicles as they prepare for ovulation.

In March 2014, researchers put this theory to the test, with a group of women with PCOS who were resistant to Clomid. Clomid is the first line intervention for fertility treatment in PCOS. In some cases, however, it doesn’t trigger ovulation – this is known as Clomid Resistance.

In this randomized controlled trial, 101 women with PCOS were divided into two groups. The first group was given Clomid alone, and the second group a combination of Clomid and Coenzyme Q10.

Endometrial lining thickness (something that Clomid often reduces) was significantly better in the group taking CoQ10.

Overall, it appears that Coenzyme Q10 may be a promising treatment to boost and protect ovarian health in women with PCOS who are trying to conceive, particularly in those who are Clomid resistant.